Wake up…feeling splendid almost as if it’s my faux Christmas as I’ll be missing the one here – anxious to get to my parents, gorgeous snowy day and that warm nostalgic feeling you get on a holiday from all the warm fuzzy memories of the past.

Then, I set foot in the kitchen. A simple feat as I’m not cooking an ounce on this feastful day to tidy up the place. Next thing you know, the screw on life of my new airtight Aladdin thermostat for my smoothies is being devoured by the garbage disposal.

Screw On Lid That Looks Like a Dog Chewed On It

Just great, just great. $20 and 4 days of use and the big wonderful thermos is useless…heartbreaking

More importantly, I have the stars and the sky to be grateful on this beautiful day.

I’m thankful for my sweet, wonderful husband that I wouldn’t trade for the world.

I’m thankful for the most loving, supporting family in the world.

I’m thankful for my health, my education and my career.

I’m thankful I’ve been given the opportunity to lead this incredible life.

An extension of the Calangute beach line, Baga Beach is a perfect getaway for those looking for peace and quiet. Baga’s night life is the liveliest in Goa and the perfect synthesis of the Goan and Western culture. Baga is a fishing Beach and ideal for sunbathing in its golden sun.

After moping around all day about missing Christmas, it always becomes especially hard after my daily lunch hour visits to Target where  I’m mesmerized by the nostalgic holiday music and the irresistible penguin decor.

To top it off, today was incredibly difficult because I had to contend with Scrooge before and after my trip 😦

Now that all the misery has died down, I experimented with Black Bean Spinach Enchiladas for supper.

Tonight is a good night to ponder how exactly I will prepare for my humongous trip in just a mere 10 days.  I can at least mark one thing off – my incredibly nifty leather bound journal I bought today for my trip memoirs – too exciting 🙂

Just came to a revelation of how my blog name came to be, but anyhow… had the best Vegetable Portobello Pizza @ Fathead Brewery’s last night… to die for… spinach, blue cheese, red peppers, caramelized onions, the perfect not too greasy – not too thick crust… Just wish everyone could be lucky enough to live around me by North Olmsted because there’s no doubt in my mind that they would get to be in veggie heaven, too!

Just ignore my husband’s dinner. It was accidentally captured on film 😦 Focus on the mouth drooling pizza…And turn that frown upside down 🙂 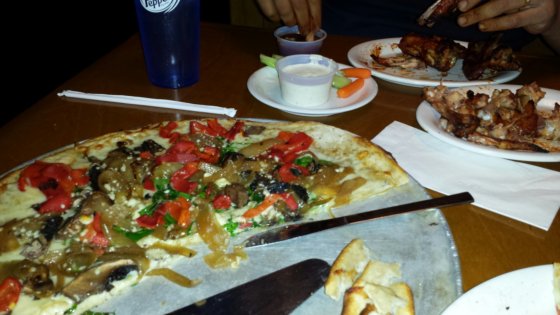 I’m officially the Green Smoothie Goddess as off this morning…

First attempt at the big leagues and it was fantastic 🙂

Started out with a solid base of almond milk, vanilla greek yogurt, coconut oil, cinnamon, and agave nectar…

Added a few chopped apples…Who says you need a Vitamix Blender? The Hampton Beach blender we got as a wedding present took those apples down like a champ!

Next, I added an entire bag of fresh Spinach. Gotta make sure that the hubby and I get THE GREENS.

Added a good cup and a half of frozen mixed berries and a half cup of pineapple tidbits to top it off.

Pressed the good ol’ Smoothie button on our machine and watch that baby blend and mix and crush away!

Poured a tad bit more agave nectar just to ensure it was on the sweet side.

I’ve barely noticed that 2 weeks has even passed.  If it had been a diet, believe me…I would have noticed, but no meat hasn’t even phased me one bit.

How I approach eating out or how I pack my lunch is a new challenge, but they’re minor bumps on the path compared to the bigger picture.

My insane addiction to Trader Joe’s Veggie Masala burgers which can be eaten for any meal – breakfast, lunch and dinner and Trader Joe’s Butternut Squash in a Bag which is my all-time favorite side dish – yummm :op

My first attempt of an Indian dish – Vegetable Korma – which came out surprisingly well considering I dabbed into spices unbeknownst to me.

Making Blueberry Spinach Smoothies for me and my husband this week

Trying Quinoa for supper one night

My first Thanksgiving as a married woman 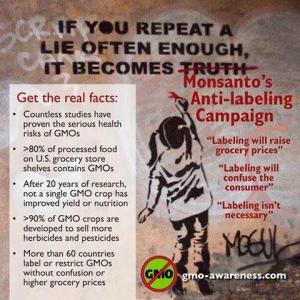 If you repeat lies about GMO technology often enough, it becomes…

Not exactly what sure came over me after 29 years of life, but I’m feeling better than ever.

I’m not sure why I didn’t take action sooner! I’ve always been super sensitive to the harming of animals, but have blindly continued to eat the diet I’ve been raised to eat.

It’s never too late to make the change…the transition has been done before time and time again.